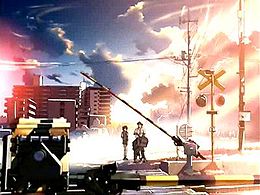 “Hoshi no koe”, known as “The Voice of a Distant Stars”, is a 2002 short film by director Makoto Shinkai (Your Name) produced in collaboration with the Japanese animation studio CoMix Wave Films.

Mikako Nagamine, a promising Japanese student whose future plans include going to the same high school as her classmate Noboru, is recruited by the UN army to fight alien invaders.

In the solitude of space, her only connection with the Earth are the E-mails she exchanges with her friend, but as she moves away, making space-time jumps, the time for receiving messages becomes longer and longer.

The love that binds the two protagonists will therefore be tested by a jump of 8 light years that Mikako is forced to make with the knowledge that, in the eight years it will take to deliver the message to Noboru, he will be able to forget her.

And while both, in their solitude, rely on the nostalgia of memories, it will be only fate to decide if they can meet again.

“The Voice of a Distant Stars” despite its short duration, it has the strong directing signature of Makoto Shinkai.

In the 25 minutes that determine the film we find in fact all the recurring themes and the narrative style that have given it notoriety in the following years.

The novelty of the science fiction theme, which immediately catches the eye on a visual level, with spaceships and combat robots, is actually very marginal in the dialogues and in the soundtrack.

While on the screen we can in fact observe explosions and images of battles, what is proposed to us at the audio level are the sad nostalgic thoughts of the protagonist accompanied by soft and melodic music.

The soundtrack is in fact one of the strong points of all the director’s films, and manages to perfectly hold and support the narrative complexity of his works.

Although it is far from the emotional depth that we are used to attribute to it, we can say that the focus of this short film, therefore the love of the protagonists put to the test by a space-time distance and by the adversities of destiny, lays the foundations for future stories that over the years we have had the pleasure of admiring.