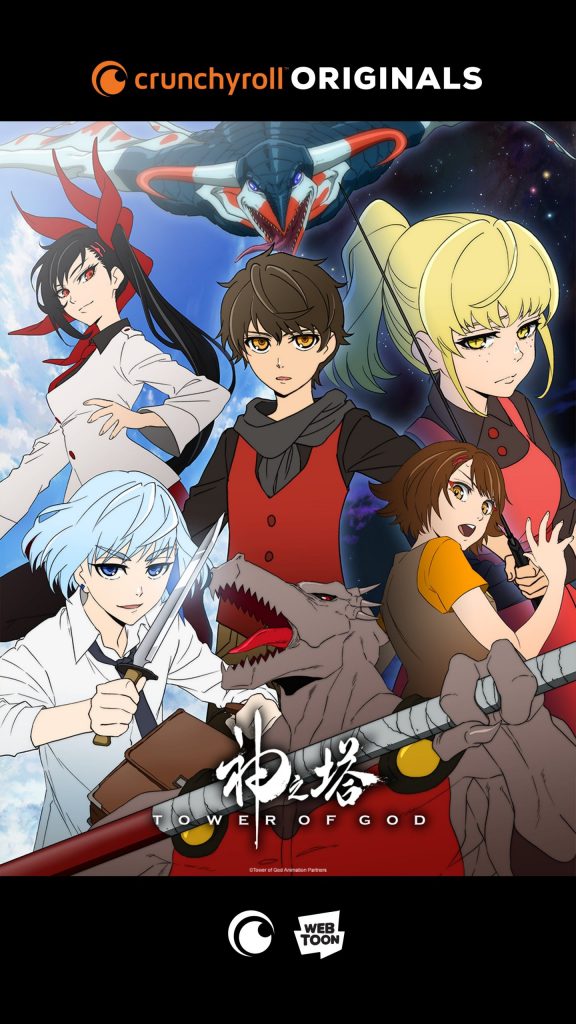 Tower of God is a manhwa or an online color cartoon.
This product is of South Korean origin and is conceived and designed by Lee Jong-hui also known in the field as Siu.

It is published free of charge on the Korean internet portal Naver and following the great success it has been translated into Japanese and English.

Contrary to other manhwa, Tower of God stands out for being in webtoon format.
For Webtoon we mean a comic published online and in this case each chapter consists of a very long page with vertical scrolling, with a layout particularly suitable for reading on devices such as tablets and smartphones.

The story of Tower of God is the first belonging to the universe of Talse Uzer, and the publication began in 2010.

The anime is produced by Crunchyroll together with Webtoon and is made by the subsidiary studio of TMS Entertainment, or Telecom Animation Film.

The anime currently has 13 episodes.

It is available on the Crunchyroll platform

The story tells of Baam Twenty-fifth, who grew up immersed in total solitude and darkness.

The only glimmer of light for Baam so far has been Rachel, the girl who has been with him since she remembers him and, by telling him about the anetoths about the outside world, has also managed to teach to talk to the young Baam.

Rachel, however, has a fixation that seems absurd to the young man: she wants to see the stars. But the girl is ready to do anything to satisfy her desire.

In fact, it is even willing to enter the Tower of God, a Gargantuan structure on whose summit, it is said, that every wish can be fulfilled.

The young Baam decides to follow his light without hesitation, but immediately loses his tracks and, in order to find it again, he is forced to submit to the rigid test system that regulates the climbing of every single floor of the Tower.

In the tower, thanks to the help of Princess Yuri Jahad and his legendary Black March weapon, Baam manages to pass the first test against all odds.

In subsequent tests Baam managed to be appreciated and appreciated by many of his opponents and allies, making a deep friendship in particular with the calculator and slightly sadistic Khun Agero Agnes and with Rak Wraithraiser, a huge crocodile with self-esteem equal to its large size .

But in a still world like the Tower, where every breeze of change is contained even before it can cause any damage, Baam’s anamal presence is something that no one had trodden and everyone seems to want to hinder.

What does Baam have to do with Jahad, the legendary, immortal and omniscient Lord of the Tower?

With a crescendo of dissatisfaction reigning in the rotting air of the Tower and an imminent civil war at the gates, the climb to the top floor for Baam has only just begun.

The answers, however, can only be given by the audacious who will reach the top.

The soundtrack is very pleasant to listen to, it does not represent a masterpiece, but it certainly is not to be discarded either. Rather!

The graphic style is not the best unfortunately, but it is also not the worst ever. You can get used to it without any particular difficulty.

As for the animations, their quality is very fluctuating especially towards the beginning.

Instead, what I did not particularly appreciate is the continuous insertion of skills, areas and characters without a particular study even if it would be required to involve the viewer more.

Further for now there are various questions still remained unanswered for viewers finding themselves watching this work.

In case you want to view it, you can find it without difficulty by pressing the button on the right.